The ponies were a big part of Tiny Town.  There were two groups, or “strings” of ponies, obtained on two separate occasions, and never the twain shall meet.  The pony strings did not get along with each other, and they were kept in separate corrals so they wouldn’t harm or even kill each other.  It was doubly important to keep the two groups apart at the sweep. I learned a healthy respect for their hierarchy.

After Matt died I went to live with NaNa in her mobile home at Tiny Town. I was nine years old.  During that time, I got up early most days to participate in grooming and saddling the ponies and riding them up to the sweep. That ride was always hairy, especially in the morning when the ponies were spirited and ready for a good romp.  I so loved the ponies, and I was fascinated by their behaviors and interrelationships, their illnesses and injuries.  But I also feared their running away with me on their backs, and their escaping en masse and trotting all over Compton, both of which happened at intervals.

The ponies appear in memory as enigmatic and intractable beasts doing a job for Tiny Town.  I remember being disappointed that they were so little like the horses on TV.  Some of their names were Mike, Pat (named after my mom), Chief, Smokey, Scout, Thunder, Speck (he died after other ponies attacked him) and Major.  At one time there were as many as nine ponies at Tiny Town.

The photo’s on this page show the first pony ride that Matt built.  It was called the sweep.  The ponies were trained to “push” the spokes. (Actually they pulled the spokes by short chains attached to the back of the halters at chin level.) Once activated by the ponies’ forward movement the sweep revolved with so little effort, that the ponies sometimes appeared to be sleep walking.  At the end of the ride, however, the pony boy would disconnect the animal and with a yell or slap on the rear, send the pony with strapped-on rider running around the inside edge of the enclosure fence.  This run was the final thrill of the ride. It sent kids to squealing, as they experienced a few seconds on a galloping pony.

Click on any photo to see a bigger version of it. 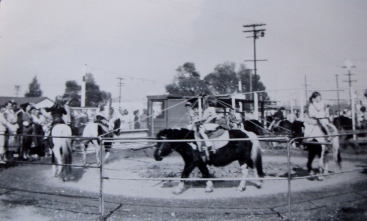 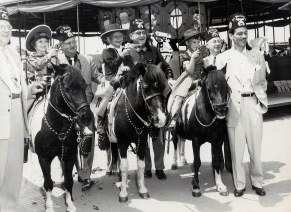