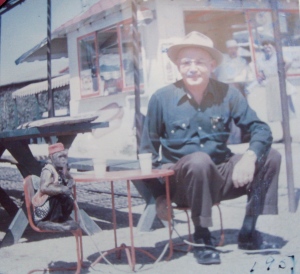 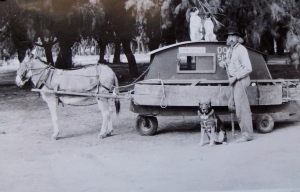 In addition to the ever-present ponies, a variety of other animals and animal acts appeared at Tiny Town over the years.  Some were associated with traveling circuses and carnivals that needed a temporary winter home.  Not only animals passed through, but everything you can imagine, from old Italian carnies with their giant Rock-O-Plane ride, to the Legion of Honor Fire Works Stand. Matt was a showman at heart.  At Tiny Town he had a ready venue, room to spare, an open mind, and he was ready to make a deal.

There is even a newspaper account of a live sea lion attraction in the boat ride.  By today’s sensibilities, an ape on a chain, a monkey begging for coins, or that sea lion dumped in the moat, where grimy two-stroke boat motors released a steady oil slick—this is all unthinkable stuff.

The animals were there to accomplish necessary tasks.  There were chickens to eat leftover food, goats to keep the weeds down, cats to hunt gophers and a German Shepherd to companion the ponies and guard the place.  As ever, Matt encouraged my interests, so eventually we even got into parakeets and goldfish.